An Excuse to Talk About Fantasy Football or It’s Prime Submission Season!

For a few days, I’ve been trying to think of a good excuse for talking about fantasy football on a blog that’s supposedly about writing and books and shit. I’ve done this before, coming up with justifications to discuss Scott Pilgrim and Earthbound and and all kinds of esoteric subjects. I thought maybe I could pass the draft day experience as an unfolding narrative, how once choice affects another (for example, if you use your first pick on Chris Johnson, you don’t then use your second on another running back with the same bye week). 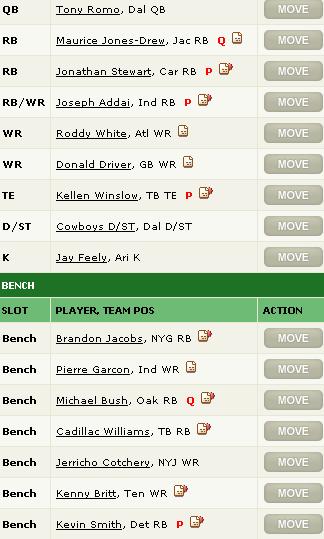 Excuse me? Is you saying something? Nu-uh. Can't tell me nothin'.

How’d I do? I feel good about it with the exception of Winslow (I wanted Visanthe Shiancoe, but I’m in a league with Minnesota fans). Do you guys play fantasy? Or do you think, like Marvel Editor Nathan Crosby, that it “combines the excitement of the NFL with the sadness of role-playing games”? Can you come up with any parallels between the world of fantasy football and writing? Ok. Wait a sec. How about this shit? Assembling a fantasy football team is a lot like assembling the contents of a literary journal. You’ve got to balance things while playing towards your aesthetic. I’m a running back guy. I took one in the first round (then a WR then QB) and then a bunch of RBs in a row. Is this like editing a journal that primarily runs metafiction while still trying to balance things in terms of gender and race and sexuality? Are you also worried about Maurice Jones-Drew (language thugs like me call him The Hyphen) blowing out his knee and ruining your season? Are you too obsessed with the Talented Mr. Roto?

One last thing. And this has nothing to do with fantasy football but everything to do with lit journals. IT’S SUBMISSION SEASON AGAIN! I remember very vividly when I started my MFA program going for drinks with two recently graduated poets. They clinked glasses and made a toast to the new submission season. One thing I miss in an era when so much of what we do is digital is the idea that September 1st is the universal starting day for new submissions. So many online outlets read year round (which is obviously so much better for everyone–writer and reader both) that the anticipation of 9/1 just isn’t what it used to be.

However, I am preparing to send out a shit ton of new work. How do you guys go about this? Recently I told a current MFA student that I like to have no fewer than 30 submissions out at any given time, and she looked terrified. Is 30 high? Do you send to more places than that? Are you like me and get panicky whenever your submissions queue on Duotrope drops below 20? Do you not use Duotrope? How many times will you try a journal before you give up (DON’T GIVE UP; I’ve gotten into a bunch of journals that initially rejected my work)? How do you find new journals? Through the work of your peers? Through lit blogs like HTMLGIANT? If you don’t know Chris Johnson from LaDainian Tomlinson, but know the difference between Ploughshares and Diagram, hit me up in the comments.

What? Deal with it.