Why Super Mario Bros. Will Affect the New Generation of Writers

A few years ago I came across a story of Tom Bissell’s in Best American Short Stories 2005. I can’t remember everything about “Death Defiers”, but I’m pretty sure it involved an American photojournalist in the Middle East who gets swept up in some sort of bizarre, familial poison plot. The details are fuzzy, but what I recall quite clearly is the final paragraph: a beautiful piece of prose describing the protagonist stepping on a mine and flipping through the air. I’m not doing this story any justice whatsoever, but I liked the piece enough at the time to add Bissell’s name to my “To Read” list.

I’m sure all writers/readers have similar lists. Mine’s in the back of whatever moleskin notepad I’m keeping my writing notes in at the time. The list comprises every book or writer that I need to read. Sometimes I make it through these lists in their entirety, but most of the time I do not. In the intervening years between first reading Bissell’s short story and now, I’ve seen essays of his from time to time but little else. Then yesterday, over on HTML Giant, I read that he was publishing a collection of essays about his addiction to video games (and flirtations with cocaine) called Extra Lives. They linked to an excerpt at The Guardian.

Finally, someone is looking at gamer culture with a literary (and serious) sensibility. Interestingly enough, the same Best American with Bissell’s piece also contained a short story about a World of Warcraft-esque human slave labor camp. But outside of that and Justin Taylor’s fantastic flash fiction Tetris/End of the World mash-up, I haven’t really read much that looks at gaming with a seriousness of intent. I was particularly drawn to this section in The Guardian excerpt:

It turns narrative into an active experience, which film is simply unable to do in the same way. And it is moments like this that remind me why I love video games and what they give me that nothing else can…

Niko [the protagonist of Grand Theft Auto IV] was not my friend, but I felt for him, deeply. He was clearly having a hard go of it and did not always understand why. He was in a new place that did not make a lot of sense. He was trying, he was doing his best, but he was falling into habits and ways of being that did not reflect his best self. By the end of his long journey, Niko and I had been through a lot together. (Bissell)

What I love about this essay is that it recognizes that video games offer a textual experience wholly unique. Literature and film require active participation to a certain extent, but no matter how much you contextualize movies or visualize the scenes in books, you can never have a  literal direct effect on the chain of narrative events in the way you can with video games. Even comic books, which require more active participation than film or books by having white space segmenting the action which forces readers to play out the missing moments of time in their minds, cannot match the interactivity of a video game.

I’m not sure where this line of thinking will carry me, but it’s something I’ve been dwelling on a lot recently as video games factor into the novel I’m very close to completing, The Collected Works of the Digital Narcissist. The protagonist is a gamer nostalgic for the 8-bit games of yore and often embeds images from those games into the text. During a trilogy of scenes which take place during the early nineties, he describes his devotion to all things Nintendo via the following:

If you’ve only casually played video games, then you can not comprehend the inner depths of their joys. You don’t know what it feels like to give yourself up so completely to an alien world of colors and sprites, of repetition and absolute safety. You are no longer yourself. You are an avatar. Super Mario, an Italian plumber tumbled through the looking-glass. Link, the boy knight on a magical crusade to rescue Princess Zelda from the terrible Ganon. Samus Aran, the intergalactic bounty hunter tracking down alien eggs on a world controlled by space pirates. This becomes more “real” than the “real” world…

And so I began my descent into the world of microchips and immateriality. And so I began to fear the natural world. Because when you are represented by an avatar, you are no longer Michael Bishop, a skinny child with a broken arm and sharp ribs that push against your polar bear t-shirt. You are not weak and loathsome and oh so frightened that some threat lurks around every corner existing only to dismember you. I lost myself in those games for hours at a time, refused to leave the safety of my house and that monolithic Nintendo. I feared forests and lakes and birds and wind and most of all people. 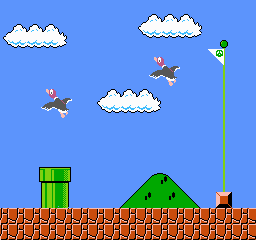 What’s interesting to me about all of this is echoed in Paste Magazine’s review of the aforementioned Justin Taylor’s Everything Here is the Best Thing Ever. Reviewer Charles McNair writes, “Justing Taylor’s first short-story collection artfully captures the view of the 200s from the perspective of a twentysomething… Several of his stories bear the unmistakable, bloggy influence of the 2000s. Do we sense some sort of new fictional frontier? Time will tell.” This is the first generation to come of age raised on video games and technology more advanced than the Atari 2600 and the Apple II. Will that have an effect on the writing produced by those writers? How about blogs and Facebook and Twitter and cell phones? I say overwhelmingly yes. Our sense of narrative has been irrevocably shifted by technology and it only makes sense that not only will the platform literature is disseminated through change, but the very writing itself.

1) This is my actual Nintendo collection.

Over the past six years, I’ve managed to track down about 150 Nintendo Entertainment System games, 50 Super Nintendo Entertainment games and 20 GameBoy games. I don’t play newer systems very much because I’d usually rather spend my free time reading, but also because I know that like Bissell I have an addictive personality and remember all too well the days in high school when I would play Japanese Role Playing Games on the original Playstation for disgusting stretches (during one horrible summer before ninth grade, I played Chrono Cross every day for three weeks for at least eight hours at a time. I became so addicted that I only stopped to hurriedly eat a sandwich in front of the pause screen). Since college, I have been content to play the games of my childhood. Super Mario Bros. Chip N’ Dale’s Rescue Rangers. Maniac Mansion. Blaster Master. Fun games with marginal narratives that only take about a half-hour to complete.

All that being said, how can I not be affected by video games? Even if I don’t play much now, so much of my life has been spent glued in front of a television screen controlling digital avatars that it wouldn’t be realistic to clam my sense of narrative hasn’t been deeply impacted by these digital worlds. And I’m willing to bet I’m not alone in this.

2) I went to college for creative writing. The program is very serious compared to other undergrad institutions and the teachers treat their pupils more like graduate students. I often bailed on the work in my other classes to work on fiction and cnf, and this was certainly not frowned upon by the real working writers who taught us. The books lifted up for us to worship were all written by the ’80’s dirty realists and their predecessors. Carver. Dubus. Wolff. Ford. Pancake. Munro. Bobbie Ann Mason. Richard Yates. And don’t get me wrong. They all still number among my favorite writers, and my devotion to Yates borders on the religious.

Unfortunately, after many years of writing each and every day, I eventually came to realize that I will never be a master of domestic realism. I don’t have it in me. My instincts naturally strive for the geeky, the nerdy, and it’s hard to hit that aesthetic in the parameters of sparse Carver minimalism. I wrote a very bad, failed novel a few years ago in the style of domestic realism. The characters were all working class, and the subject matter included decaying mines and the folly of local politics.

It was breathtakingly terrible, and after wonderful advice from a mentor of mine, I packed it away in a drawer. Since then, I have written something much more successful, and my work has begun to be published in very small publications. While working on my new novel, I found myself referencing Nintendo, putting up screen shots, using Twitter feeds, implementing blog posts, inserting web comics and even writing an entire scene in script format. People ask why I made these narrative decisions and I can only respond that it’s what felt natural and “right” to me at the time. Like Bissell, I feel incredibly affected by the prevailing technologies of my era. To deny that by reverting to a mode of writing three decades old is akin to denying myself, something Bissell and Taylor are very clearly aware of.