Bi-Weekly Friday Art Roundup is a feature I’m using to promote some unsung talents in the comic world. Each installment will look at five different books with artists working at varying levels of the industry, be it the indies, unpublished work, or even superhero fare for the Big Two. And of course, there’s always my covert goal of hyping my own comic book projects. So with the introduction out of the way, let’s get started.

With the script for The Black List graphic novel completed, co-writer Mark Kleman and I had to find a new artist to collaborate with while Lamair Nash finished his pages. For those of you who don’t know, graphic novel publishing is much different than literary fiction and more in line with creative nonfiction. We pitched to Arcana with a 22 page sample. They accepted. Now they want 110 pages. That’s going to take Lamair a long time.

In the meantime, we discovered Jaime Castro on the Millarworld forums (seriously, that place is a treasure trove of talented artists looking for writers).  We checked out his DeviantArt profile, and this is the page that made me fall in love. Besides the fact that Jaime’s art involves a superhero team fighting Nazis (awesome, right?), he also draws a dinosaur capable of reading. Look at him! Isn’t that just the perfect dinosaur? And he gets so excited about what he’s reading that he has to show it to his friend. What’s going on in his dino-brain? I definitely want to know. And when Mark and I saw this we knew Jamie would be perfect for our upcoming short, Montgomery X. Chesterfield, Gentleman of the 22nd Century.

I don’t know Andy Belanger, but I’ll definitely remember the name after Kill Shakespeare #1. For those unaware of the concept, Kill Shakespeare is mash-up set halfway through the events of Hamlet when the titular character is returning home to confront his uncle. He meets the Three Witches from Macbeth and teams up with Richard III. If that isn’t enough to pique your interest, check out the art by Belanger. It invokes the king and queen time period without devolving into Holy Grail camp, which is a serious concern in a property as insane as this one.  Like my list from a month or so back, this is a good one to get non-comic readers interested in the medium.

3. SHIELD #1 written by Jonathan Hickman with art from Dustin Weaver 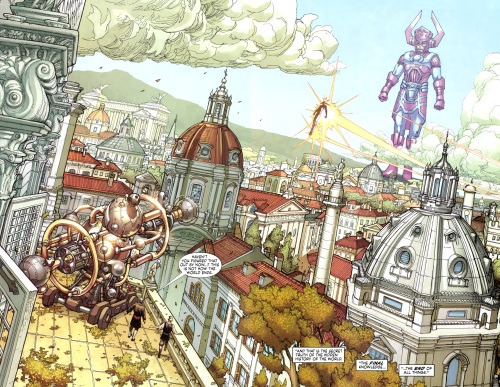 Click on the above image to view it in full resolution; it’s the only way to do it justice. Again, I’ve never heard of Dustin Weaver, but where has he been all my life? Jonathan Hickman is one of my favorite Marvel writers. He takes this universe seriously, and that’s painfully obvious from this debut issue in which Leonardo da Vinci stands revealed as a member of SHIELD, the peace keeping force in the Marvel U.  Weaver is asked to draw a ridiculous amount of meta-insanity, and he does so with considerable skill. Just look at the above example of Galileo battling Galactus the World Eater in 1582 Rome! How can you not buy this book!?

4. The Black List written by Salvatore Pane and Mark Kleman with art from Lamair Nash 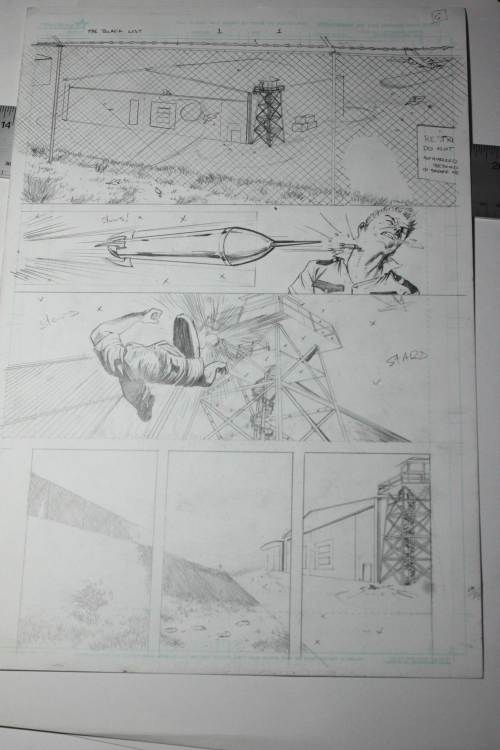 This is the super top-secret, NEVER BEFORE REVEALED, unfinished first page of The Black List graphic novel! It’s not a deleted pitch page or cover, like the other stuff I’ve uploaded. This is the real deal, just waiting to be inked, lettered and collected into the final volume. We just received this from Lamair Nash a few days ago, and it’s really hard to describe the amazing experience of dreaming up a scene in your head and then having a talented artist render it on the page. Also, holy crap, has Nash improved or what? I always thought the man had chops, but this is outstanding. I cannot wait to see the finished project.

Longtime readers know that I am a Scott Snyder disciple. I blogged about American Vampire before it was the indie darling it’s become, and I am a big fan of his excellent prose short story collection, Voodoo Heart.  That being said, I love his take on Iron Man in a noir setting. Marvel’s Noir line reimagines their major characters as gritty 1930’s analogues more at home in The Maltese Falcon than Batman and Robin. Most of these titles have been hit or miss, but Snyder’s take has earned rave reviews so far. And Manuel Garcia is turning in career defining work here, people. I couldn’t find a decent picture of his noir-inspired take on Tony Stark’s Iron Man armor, but it really has to be seen to be believed. If you’re excited about the upcoming film, pick this up as an alternative universe primer on the one-and-only Tony Stark.